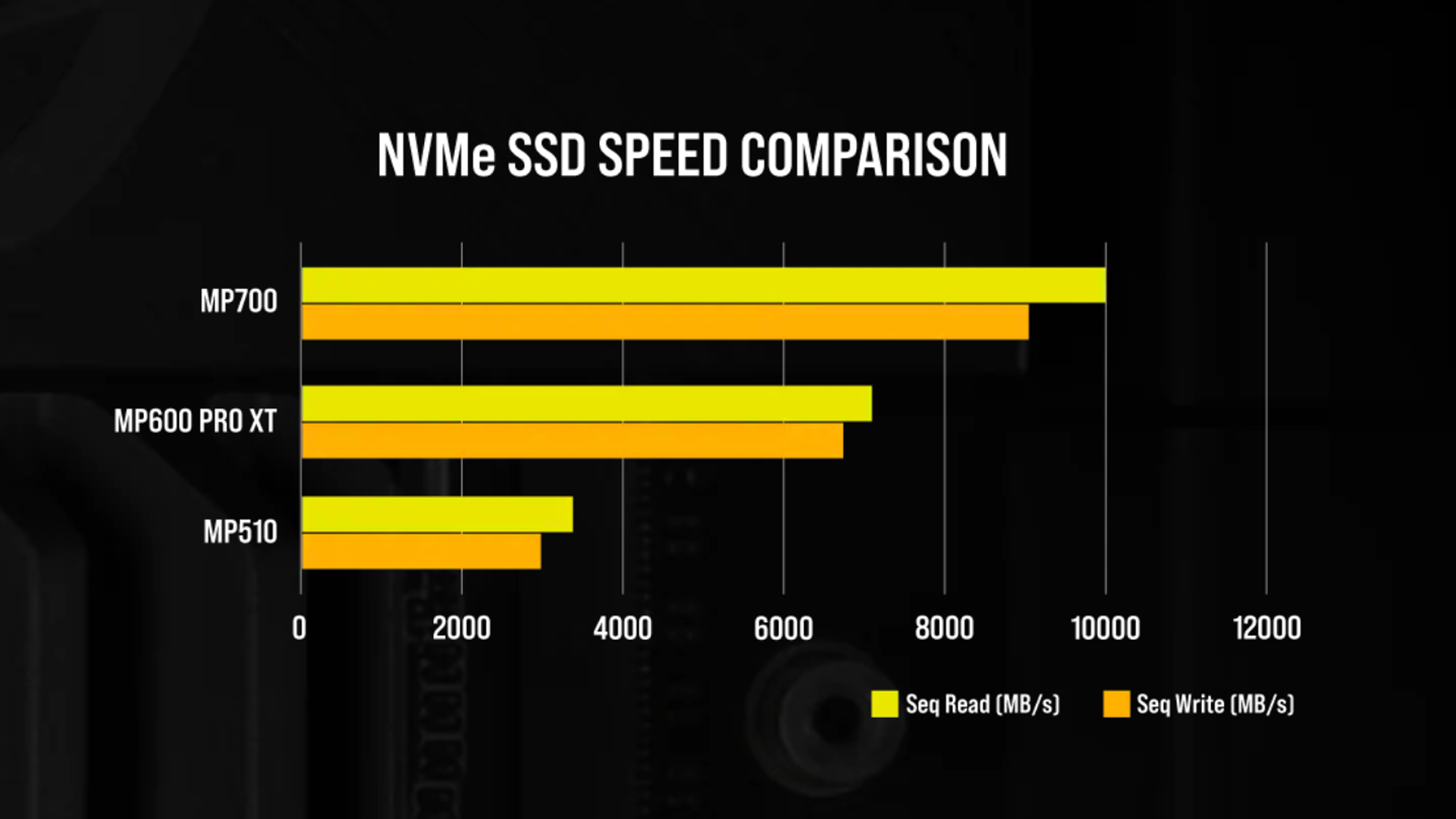 Corsair has revealed a small teaser for its upcoming PCIe Gen5 M.2 SSD, the first of its kind from the manufacturer. Called the MP700 (a straight update from the previous Gen4 MP600 series), the new SSD supposedly features a whopping 10,000MB/s read speed, with up to 9,500MB/s sequential write speeds too.

Off the back of a strong current partnership with AMD, Corsair was keen to highlight the AM5 compatibility of the new SSD, indicating that it might see a launch in September of October of this year to coincide with the release of AMD’s next generation of processors. It’s worth remembering that Intel’s Alder Lake chips already have PCIe 5.0 support, too.

If it hits the projected speeds in real-world use, the MP700 will be as much as 40% faster than the most expensive PCIe 4.0 drive Corsair produced (the MP600 Pro XT).

However, that still won’t make it the de facto best SSD – price will be an important factor, and this isn’t even the fastest PCIe 5.0 announced; Apacer’s world-first offering shown at Computex 2022 was capable of up to 13,000MB/s speeds.

Analysis: PCIe 5.0 could become mainstream sooner than we think

M.2 SSD adoption is becoming more widespread among PC users, due in no small part to the steadily decreasing prices of M.2 drives and their inclusion in virtually every new laptop release. It was originally expected that PCIe 5.0 SSDs would only arrive for enterprise PCs in 2022, but this teaser from Corsair suggests that consumers might get their hands on the new drives this year too.

This is a good thing; M.2 SSDs offer massively improved performance and longevity compared to conventional hard drives or even SATA SSDs. Just as PCIe 4.0’s release saw a drop in the prices of PCIe 3.0 M.2 drives, we can expect current-gen PCIe 4.0 SSDs to get a bit cheaper in the wake of these new products.

With both Intel’s Alder Lake and AMD’s incoming AM5 Zen 4 CPUs equipped to support these speedy new SSDs, we could see PCIe 5.0 become the norm faster than you’d expect, largely driven by laptop manufacturers wanting to equip their flagship devices with the very latest hardware. We’ve seen the same situation evolve with DDR5 RAM; PC-builders haven’t rushed to upgrade their existing rigs en masse, but every high-end gaming laptop now comes with DDR5 as standard.

In any case, the upcoming releases of Intel’s Raptor Lake and AMD’s Ryzen 7000 processors will prove an ideal time for PC users of all budgets to upgrade some of their hardware. Even if you’re not making the leap to a next-gen processor with a whole new motherboard, it could be a great opportunity to snap up a faster drive at a reduced price.