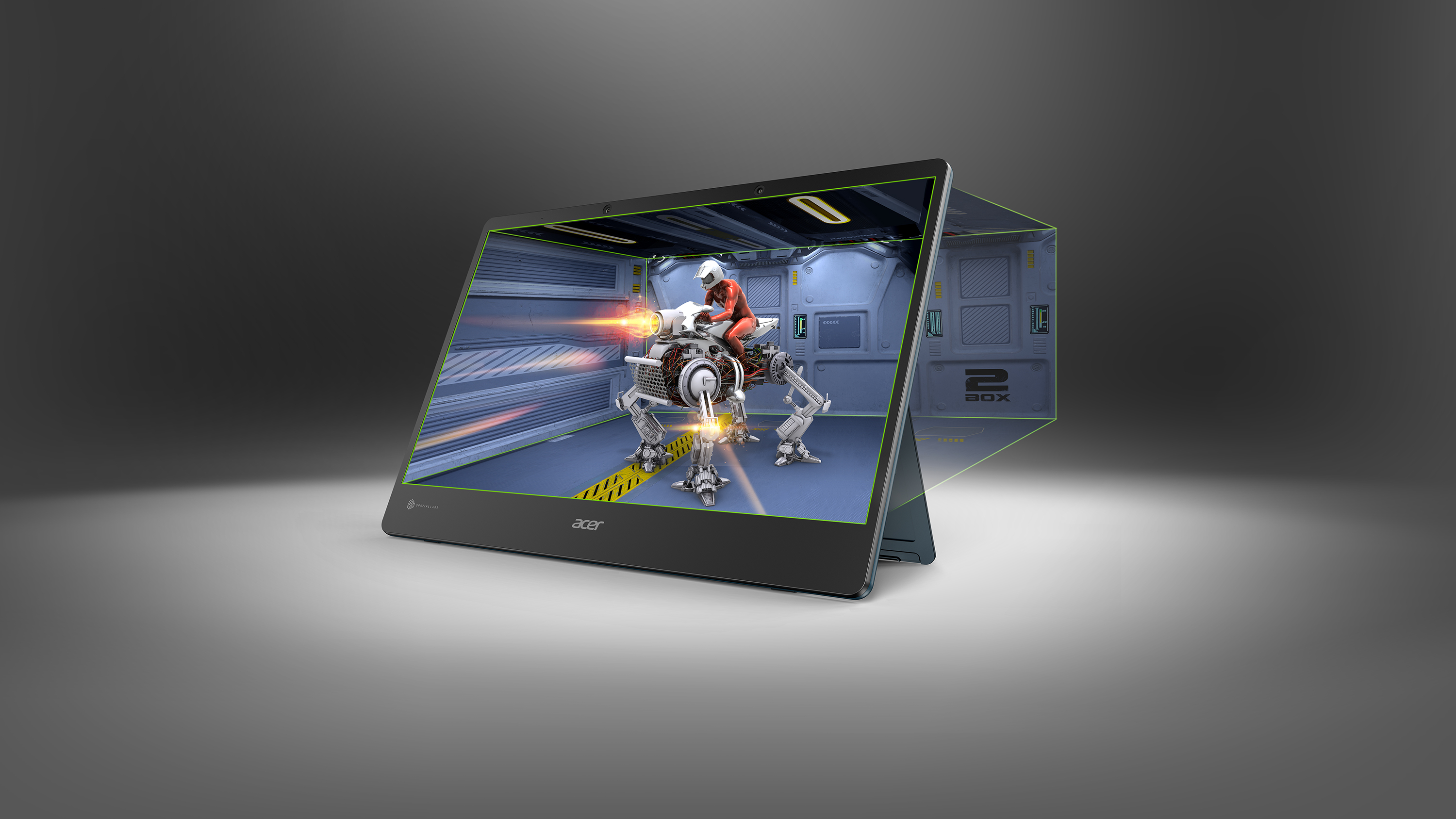 Acer has unveiled a pair of new 4K monitors which offer glasses-free stereoscopic 3D at its next@acer event.

The Acer SpatialLabs View monitor is aimed at gamers, and will be arriving this summer, whereas the SpatialLabs View Pro is targeted instead at a professional audience (creatives), though it won’t debut until later.

Both of these monitors are 15.6-inch screens with a 4K resolution and a 3D mode (as well as a 2D mode for normal usage when you don’t want a three-dimensional effect). The stereoscopic 3D effect itself is realized courtesy of a liquid crystal lenticular lens optically bonded on top of the actual 4K display, used in combination with an eye-tracking solution.

The gaming monitor will drop first, although Acer hasn’t provided us with any spec details yet, beyond it having a 4K resolution and a brightness of 400 nits.

The benefit of stereoscopic 3D can be enjoyed on games which are supported by the SpatialLabs TrueGame app, which uses pre-configured 3D profiles to create a fine-tuned three-dimensional effect.

Over 50 games will be supported at launch – apparently that’ll be a mix of both contemporary PC games and older titles – with more set to be brought into the fold as time rolls on.

Acer boasts of the 3D effect: “Rooms appear more spacious, objects appear genuinely layered, and adventures become more exciting – all smooth, in real-time, and without the need for special glasses.”

As well as games, the screens can also give you a 3D viewing experience for media content, thanks to SpatialLabs Go, AI-powered tech that takes, say, a 2D video and gives it a 3D-like appearance. Any full-screen content, even your own photos, can be viewed in this manner.

Acer’s SpatialLabs View Pro monitor is the other product here which will again have a 4K screen, as mentioned, but this model will also sport 100% coverage of the Adobe RGB color gamut (and comes with a VESA mount, in case it’s required for a kiosk display, for example).

The Pro model leverages the power of the SpatialLabs Model Viewer app for 3D content creators, and Acer has just incorporated support for Datasmith, allowing creatives to use software like Revit, Solidworks, or Cinema 4D via Datasmith export plugins.

Creators can import their projects into the Model Viewer to check out 3D designs in all their glory, and it’s dead easy to do so (just requiring a single click, in fact).

Other workflow benefits with the SpatialLabs View Pro include allowing Blender and Maya users to edit on a normal 2D panel, while connecting the Acer monitor and seeing those changes in 2D happening in real-time to the model on the 3D display. Nifty.

In terms of release schedules, the Acer SpatialLabs View (ASV15-1B) monitor is due out this summer with the price pitched at $1,099 (around £880, AU$1,560) in the US, but the View Pro monitor hasn’t had a launch date confirmed yet (or a price for that matter).

Analysis: 3D on the move – a light and portable 4K monitor

While the small size of this monitor is unusual – being a 4K panel, crammed into 15.6-inches of real-estate, which truly seems like overkill – it’s presumably using the same panel as the new Asus gaming laptop (which is a 15.6-inch model) also revealed at the company’s event. And that compact nature does confer other benefits in terms of portability.

As the SpatialLabs View monitors are also light (weighing in at 1.5kg), this makes them easy to cart around if you want to take a gaming screen to a LAN party, maybe, or in the case of the Pro version, to some kind of meeting or pitch. The size also fits with the idea of using the SpatialLabs View as a second screen, as mentioned with the 3D rendering scenario above.

There may be limitations regarding the potential size of the panel given its glasses-free 3D tech in terms of physical aspects or cost issues (though surely dropping to a more sensible sounding 1440p resolution would’ve helped on the latter front anyway).

Whatever the case, we can vouch for the 3D effect being impressive, as we’ve seen these stereoscopic 3D panels in action (Acer was busy demoing the technology last year, you may recall). Professionals and gamers alike may well be tempted by these screens, given the diverse and useful applications outlined above for work and entertainment alike (being able to view your own snaps or videos in 3D, and running certain games this way is surely going to be a compelling draw, even if the monitor isn’t cheap for its size).