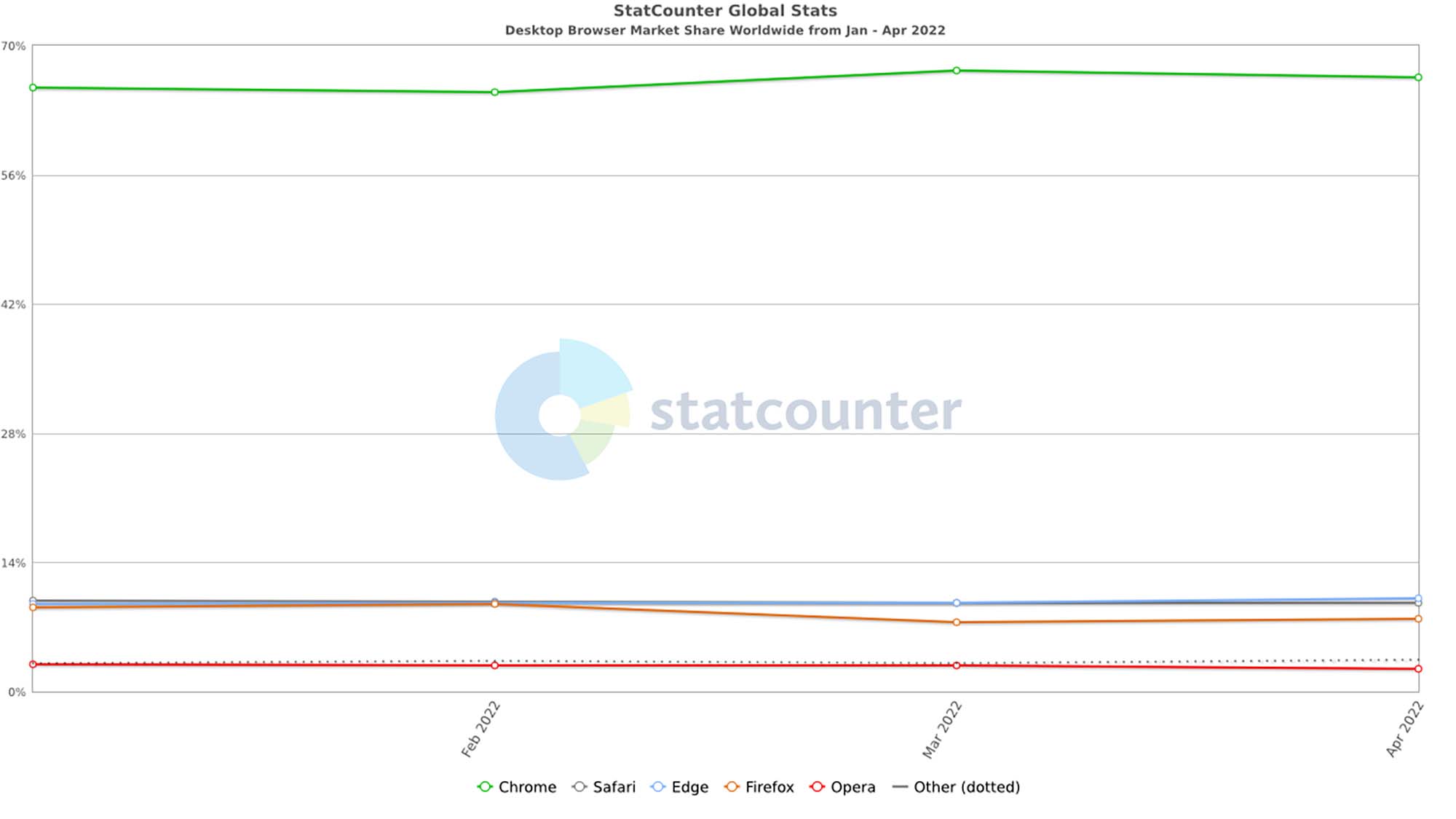 For the second month in a row, Microsoft Edge has gained market share over Apple’s Safari, consolidating its position as the second most popular web browser, but it is still a distant runner-up behind Google Chrome.

The new data comes courtesy of StatCounter, which tracks the market share for web browsers (among other things). In their latest report covering April, Edge ticked up from 9.65% in March to 10.07% in April, while Safari – which dropped from second to third place in March – ticked up slightly as well, from 9.56% to 9.62%.

The biggest loser is still Mozilla Firefox, which dropped from 9.47% in February to 7.57% in March, with a slight tick back up to 7.87% in April. The behemoth running roughshod over all of these, of course, is Google Chrome, which saw a solid bump from 64.91% in February to 67.29% in March, almost entirely at the expense of Firefox, before ticking down slightly in April to 66.58%.

Microsoft’s Edge browser has made major strides in recent years to build its user base, especially after Microsoft rebuilt Edge around the Chromium framework, the same web engine that provides the foundation for Google Chrome.

This allows for a lot of the best features of Google Chrome, like extensions, to also run in Microsoft Edge, while the browser enjoys a level of system integration that Google Chrome can only envy.

There is no question that this integration into Windows 11 definitely helps prompt user adoption. Changing your default browser isn’t hard, but it’s also something you have to actively do, and since Windows 11 comes with Edge already set as the default browser, users, are just as likely to simply let it ride.

The adoption rate for Windows 11 has been slow, but it has been increasing. As Windows 11 adoption steadily grows, there is likely to be a baseline growth for Edge going forward, regardless of anything Microsoft does to promote it.

TechRadar has reached out to both Google and Microsoft for comment and will update this story if and when we hear back.

While the gains made by Edge are very real, these two browsers are still getting lapped several times over by Google Chrome. In many ways, the web browser market really is Google’s to lose. It has a commanding lead now, but so did Intel after it introduced its Core series processors. AMD had no answer to Intel Core processors, and so saw its steadily growing market share suddenly crater to roughly 15%, down from a high in the low-to-mid 30s.

In 2017 though, AMD bounced back with its new Ryzen processors, and things began to turn around very quickly. Now, AMD is going toe-to-toe with Intel in market share and has achieved some degree of parity in the desktop processor market.

There’s no reason why the same thing can’t happen to Google Chrome. Edge has a few notable advantages over Chrome, namely that its memory management is simply better. We all know the consequence of opening up too many Chrome tabs. Edge simply doesn’t have nearly as much of a problem in this regard (opening 200+ Edge tabs is going to tank your performance, too, obviously).

Edge’s growth disappears when it comes to mobile browsers, however, and it doesn’t even have enough market share on mobile to break out of the Other category on StatCounter. Here, too, Chrome dominates the market with about 63% of the global market, with Safari taking up another 25% (Safari is the default browser on iPhones). Chrome and Safari are much closer to one another on tablet market share, 47% to 38%, respectively, with Edge accounting for just 0.27%.

Even as the Redmond giant continues its push to compete with Google in the browser wars, and makes incremental gains, it’s got a long slog ahead of it.