This haptic glove lets you feel the virtual reality metaverse

This haptic glove lets you feel the virtual reality metaverse 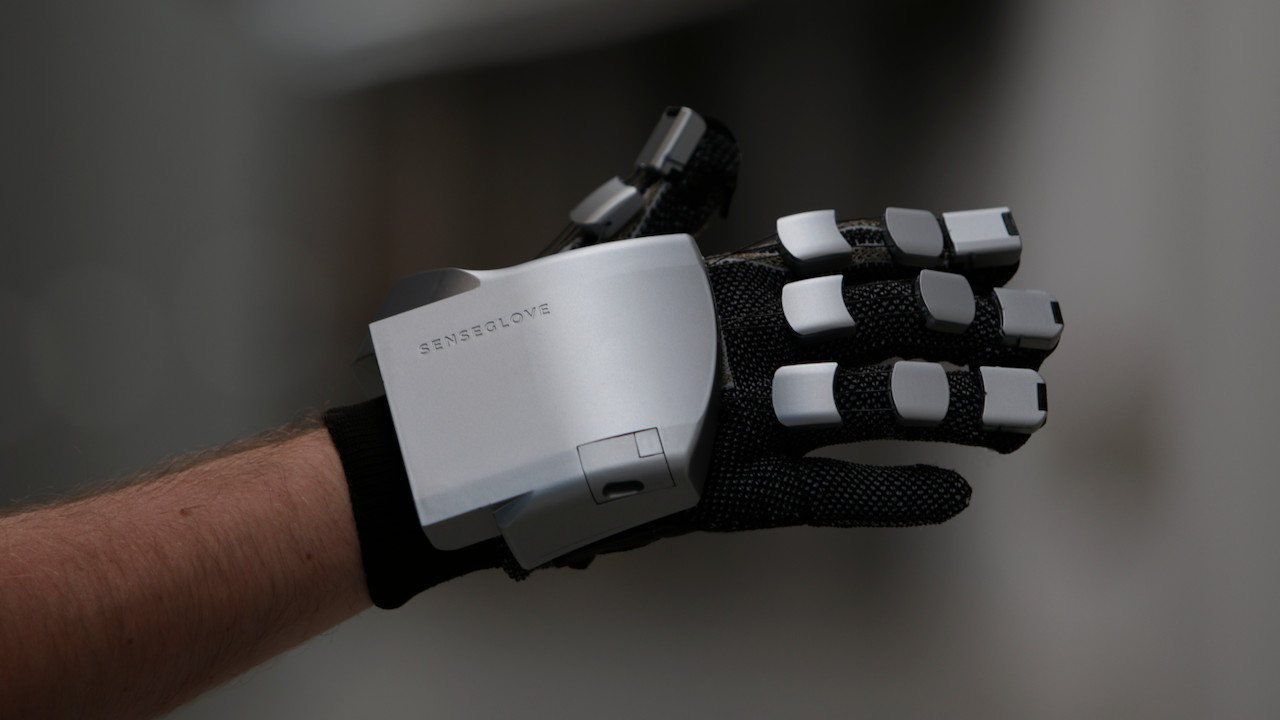 Haptic gloves have been around for years, allowing you to ‘feel’ objects in virtual reality. But most of these haptic accessories are difficult to set up, need to be wired to your VR system, require additional tech and are eye-wateringly expensive.

We recently tested the SenseGlove Nova, a pair of haptic gloves which are different in that they work with standalone headsets (like the Oculus Quest 2), don’t require a lengthy set-up process and don’t need wires either.

Sold as part of a development package for cutting edge VR brands that starts at €3,999, these gloves are still expensive and (sorry) not made for at-home use, at least not yet. But they could represent a step forward in making VR not only look real but feel real, delivering a more immersive experience. This step could significantly impact the VR future that many major tech companies are betting big on over the next decade.

What are haptic gloves?

Haptic tech, which simulates the sensation of touch, is already built-in to our phones, games controllers and even some gaming headsets – that’s where the vibrations come from. But haptic gloves that look straight out of science-fiction movies (think mid-90s Keanu in Johnny Mnemonic) are what we need to ‘feel’ objects and environments in VR.

Consider how you feel the world around you.

Essentially, the gloves use actuators and motors to attempt to replicate the resistance you feel when gripping an object. When you go to pick up a tennis ball, for instance, between your thumb and forefinger, the tips of those fingers won’t meet – the physical space between them is filled by the ball, and you have to exert some force to maintain your grip on the sphere.

By restricting the full range of motion that your thumb and forefinger can reach when interacting with a digital tennis ball for the same purpose, the SenseGlove Nova can replicate the sensation of holding a physical object with real-world properties.

Pressure is only part of the puzzle. Nova also promises the way the actuator works within the gloves means it can replicate the feeling of buttons and specific objects rather than simply delivering basic vibrations to your fingertips.

What are haptic gloves good for?

Think training people to put together machinery or instructing them how to deal with disasters or medical procedures. They’re scenarios that require a vast amount of skill and knowledge, as well as real-world experience, which could be delivered via a VR headset and a pair of haptic gloves to minimize risks.

Our time with the SenseGlove Nova focussed around such a use case – if only in a light hearted way. We were tasked with creating a robot on an assembly line, putting together the nuts and bolts, arms and legs, with a mixture of tools. Though the sensation needs a fair bit of finessing before it would mirror a real world interaction, the gloves (which during our demo paired and attached with the Oculus Touch controllers for tracking) did give the feeling that we were not only holding a power drill, but that we could adjust the pressure of the trigger to adjust it’s drill spin speed, too.

While the smoothness of natural finger movement hasn’t been captured yet (there’s the feeling of gears and pulleys clicking into place as you use the glove, which very much still feel DIY and prototype-like in their construction), it certainly captures the sensation of holding something – and is a damn sight more immersive than using the many wand-like controllers that currently characterise VR interaction.

Training is just one use case. Nova tells us they could also be handy (excuse the pun) for product design and engineering, allowing people to literally and figuratively pressure test ideas before making them in real life.

Some companies already make similar accessories if you’re interested in a pair of haptic gloves to upgrade your at-home VR experience. The SensoryX VR Free Gloves and Captogloves tend to come highly recommended for basic haptic feedback, and they work with some of the best VR headsets. However, they look more like gloves you’d take on a camping trip than anything more futuristic.

HaptX is considered one of the best options on the market for providing realistic touch sensations. But, it is still only really used for professional-grade applications and needs to be set up professionally to work.

Haptics is clearly an essential part of ongoing VR and AR development. We know Meta believes touch is important for the brand’s future after it unveiled a prototype called the Meta Glove in late 2021.

After all, if Mark Zuckerberg’s vision of a “metaverse” in which we all live, work, play, build and (for some reason) go to concerts in VR will ever become a reality, then being able to touch the world around us will be essential in making it feel real and exciting enough for us to keep visiting. The SenseGlove Nova is primed to be at the heart of that experience.