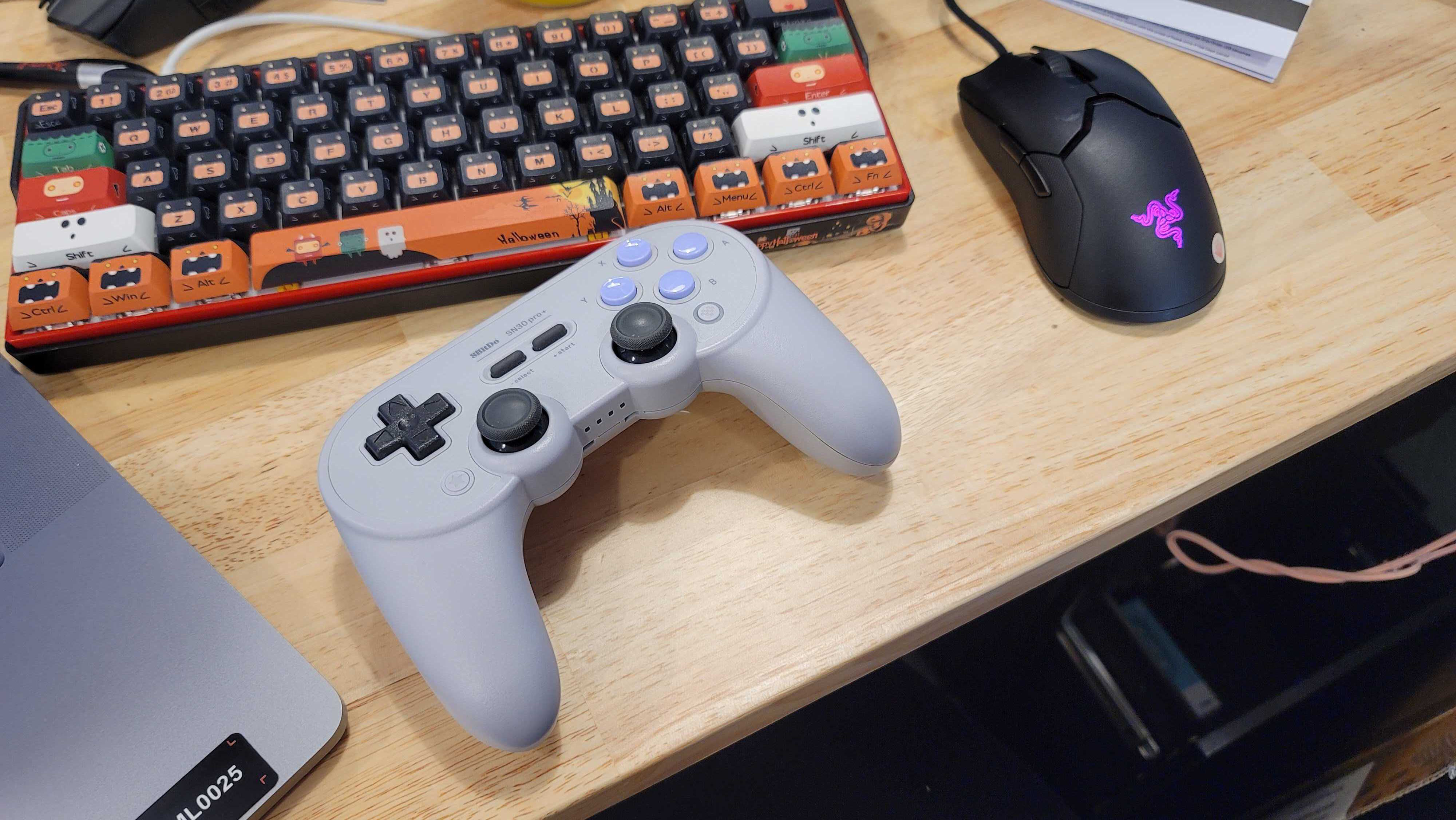 If you look around in the gaming scene long enough, you’re going to find that a lot of folks have their own special hardware that they swear up and down makes them better at the best PC games. One of the advantages of using a gaming PC over something like a PS5 or an Xbox is that you have total flexibility in the peripherals and accessories you use with them.

And while controllers, gamepads – whatever you may call them – are more commonly associated with game consoles, they’re an important part of any PC gamer’s arsenal, especially if you’re playing Elden Ring as much as I’ve been.

At home, I’ve been using a standard Xbox Series X controller that I got through the Xbox Design Lab. It’s seen me through some of the hardest parts of Elden Ring, and through pretty much every third-party game that’s come out over the last couple of years. However, there is a controller that a lot of gamers secretly swear by: the 8BitDo SN30 Pro+.

I’ve heard so much about it in the past, but this morning I walked into the office and there was one just sitting on my desk in its packaging for some reason. So, I did what any reasonable person would do. I downloaded Elden Ring and put it to the test.

Everyone is talking about Elden Ring right now – likely because it’s sold 12 million copies, according to a press release from the developer – but games like it are the perfect test of a new PC controller.

Elden Ring will both put your reflexes to the test, and if there is an issue with a gamepad, you’ll know immediately. If a button doesn’t register sometimes, you are going to die. If a button gets stuck occasionally, you’re going to die. And if you’re using a wireless Bluetooth PC controller like the 8BitDo SN30 Pro+.

The unforgiving and precise nature of games like Elden Ring and Dark Souls is exactly what I’m looking for when I’m testing any piece of gaming hardware. Although, please never ask me to play these games with a mouse and keyboard – I don’t deserve that level of torment.

But after about an hour of playing with the 8BitDo controller, I don’t really want to put it down.

When I first pulled the controller out of its package, I was shocked at how light it was. But, even though it weighs less than the Xbox Series X controller, it already had a battery pack in it – an immediate point in its favor.

I had some problems setting it up initially, but only because I looked at the charging status LED and assumed that would be what would be blinking when I was trying to pair it with my PC. That just goes to prove that even if you’re constantly opening and setting up new and shiny tech toys, you should always read the instructions that come packed with a device.

But even with how light the controller is, it doesn’t feel like a cheap plastic toy. The 8BitDo SN30 Pro+ is made of plastic, sure, but the body of the controller is rigid, and the buttons feel nice and crisp. That’s a weird word to describe how a button feels, but I can’t really think of something more accurate – like taking a crunch on a fresh apple, but pressing your finger down on a controller.

Pretty much any controller I’ve ever picked up there’s been a period of adjustment, where my muscle memory is adapting to the controller layout, the shape and even the weight of the thing. But with how comfortable this 8BitDo controller is, that adjustment period was minimal. The only thing that I still can’t get over is how skinny the D-Pad buttons are, but it’s not enough to distract me from what I’m playing.

It hasn’t escaped me that these controllers are designed with retro gaming in mind, and I’m rambling about how well it works for the most trendy modern game around. But in a lot of ways that’s appropriate for a game like Elden Ring.

There aren’t any gimmicky features to the 8BitDo 30+ Pro that are completely unnecessary. I still don’t know why the PS5 controller has a touchpad, and especially why the company thought it would be necessary to add it to the latest controller.

The 8BitDo SN30 Pro+ really is a stark contrast to the DualShock 5. Where Sony felt the need to stuff its controller with a new vibration engine, shiny lights and an even bigger touchpad, the 8BitDo SN30 Pro+ skips all of that and just focuses on what makes a controller good in the first place.

It’s a bit early for me to say that it’s going to be a long-term win here for 8BitDo. I have only been using the controller for an hour or so, but I can already tell it’s going to be the controller I pack in my backpack. I use a lot of gaming laptops for work, and its lightweight and easy Bluetooth pairing means that I can easily carry this around without worrying about cables or dongles.

What’s perhaps more important is that the 8BitDo SN30 Pro+ has opened my eyes to other third-party controllers. I have to admit that when it comes to PC games, I typically just stick with the Xbox controller and call it good. I don’t have to worry about compatibility issues, and the form factor is familiar.

But this controller is so good. The last time I used a third-party controller was a Logitech F310 gamepad. I basically bought the thing because I needed a gamepad for some game or another that I was playing back then and it was cheap. The thing is it felt cheap, too. The buttons were mushy and the cable was firm, and after a while, it simply stopped registering button presses sometimes.

After that, I moved on to the Dualshock 4 controller, due to the familiar stick layout, and called it good. I never really looked back at other controllers after that. But when I look around at the market, there are dozens of controllers for PCs that look wonderful. Now I want to try more of them out, and it’s all thanks to 8BitDo. This controller showed me that sometimes, the grass really is greener on the other side.