What if Apple said “Screw it, let’s do a gaming laptop”?

What if Apple said “Screw it, let’s do a gaming laptop”? 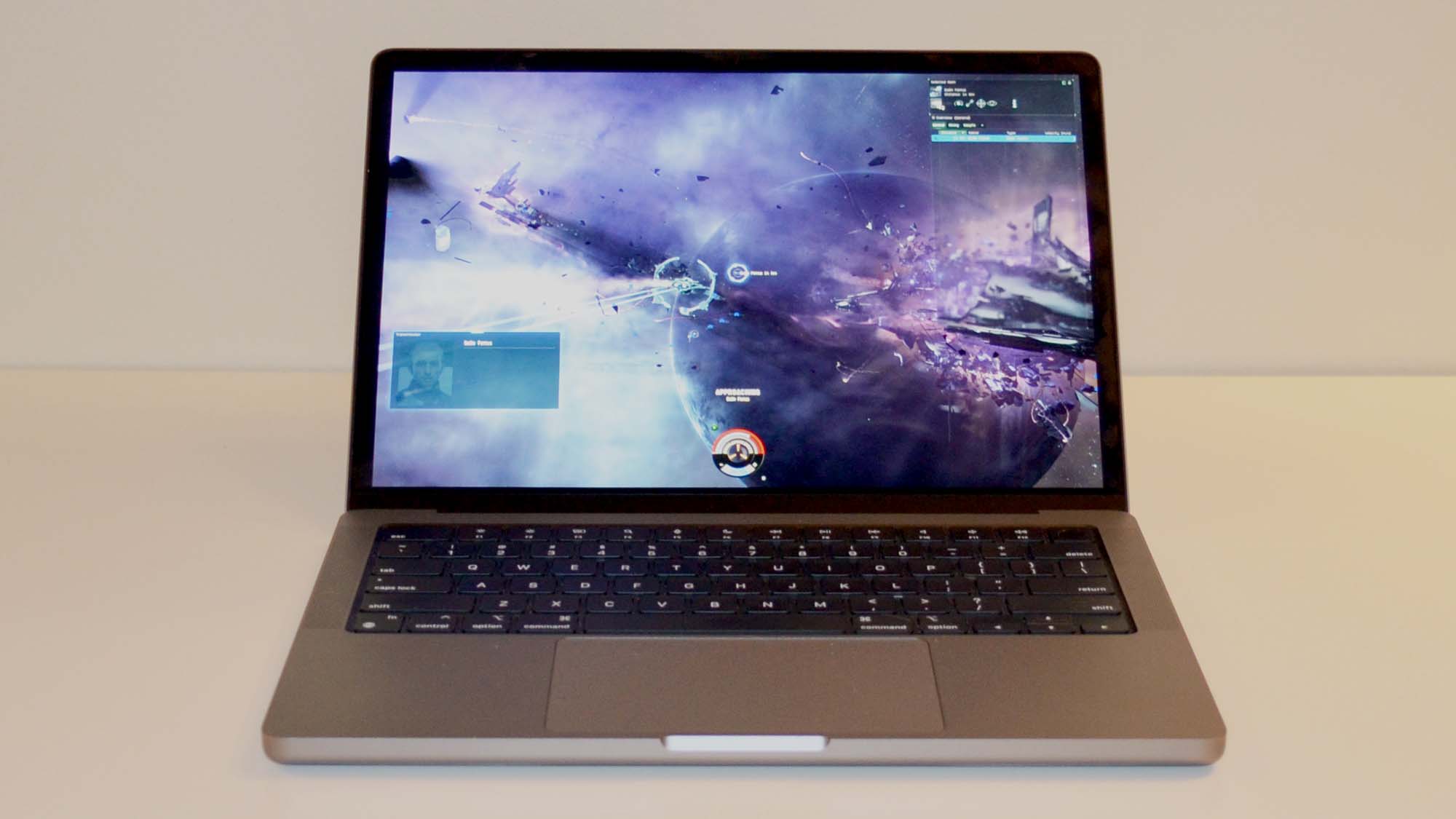 The best gaming laptops bring high-performance hardware in a portable package to allow you to game everywhere you go (at least as long as their batteries last), so it’s obvious that they would be a hit with PC gamers of all stripes.

Even dedicated gaming rig builders wouldn’t scoff at an Alienware laptop with an RTX 3080 Ti and 32GB RAM, but pretty much every gamer would look at you sideways if you told them to buy MacBook Pro.

Even though many of the best PC games are also the best Mac games, Apple has had a gaming blind spot in its MacBook lineup since the very first iBook was announced in 1999.

Over the years, MacBooks and especially MacBook Pros have become more and more categorized as premium, general-purpose laptops or professional equipment that treated gaming as an afterthought, if it even considered it at all.

This has allowed the gaming space to be almost entirely filled by Windows PCs and laptops running third-party hardware, which is how things have been for more than 20 years.

That has started to shift, however, and for several reasons. While there hasn’t been a Mac gaming revolution (yet), Apple itself has taken an interest in competing in the gaming space for the first time in decades and it has a lot of things going in its favor.

But PC gaming isn’t the kind of thing you can do effectively with half-measures, however, so Apple would need to go big if it plans to make a play for one of the fastest-growing consumer markets in the world.

It has the hardware and the incentive to do so, so what would it look like if Apple said “Screw it, let’s do a gaming laptop”, and how could it win over skeptical PC gamers?

What kind of hardware would it bring to the table?

Some Apple fans will be quick to point out that the current line-up of MacBook Pros make excellent gaming laptops, especially as you move higher up the configuration stack to the M1 Pro and M1 Max.

They aren’t wrong on that point, at least as far as the hardware is concerned. I’ve recently taken a MacBook Pro 14-inch with M1 Max and 64GB unified memory, and I have worked through a lot of games with dedicated Mac support on Steam to see how well they perform against their Windows counterparts (Full disclosure: Apple was kind enough to loan TechRadar the device for testing purposes; and while 64GB memory is a huge amount of memory, its impact on gaming performance over a 32GB RAM gaming laptop would be negligible given the demands of current games).

In my experience with Total War: Three Kingdoms and Shadow of the Tomb Raider – both of which have built-in benchmarks making it easy to test multiple devices for comparison – the MacBook Pro with M1 Max is absolutely capable of high-end gaming.

On an RTX 3080 laptop with an Intel Core i7-11800H processor and 32GB RAM, Shadow of the Tomb Raider averaged 50 frames per second (fps) at 1440p and the highest settings. With the MacBook Pro, it was averaging 45 fps at 1600p with the highest settings, so well within striking distance of one of the best processors and GPUs for gaming laptops out there.

And, if you drop the settings down one notch to high at 1200p, you’re averaging 60 fps easily, while similar settings on the RTX 3080 laptop scored about 83 fps. Still, 60 fps is the bar you need to clear with PC gamers, and the MacBook Pro with M1 Max does so with what is essentially integrated graphics. And on a 14-inch screen, if you told me you could tell the difference between ultra and high settings on a Total War battle map without seeing them side by side and zoomed in, I’d call you a liar.

Ultimately, in my experience playing a variety of games from EVE Online to Disco Elysium to the Tomb Raider trilogy to Metro Exodus, there was little to no difference between it and some of my favorite gaming laptops of the best couple of years. As a professional mobile workstation, the MacBook Pro with M1 Max approaches the gaming performance of the best RTX 3070 laptops, and it’s not even trying to be a gaming laptop.

If anything, the MacBook Pro looked and played even better then those other devices entirely by accident, which makes me really wonder what it would be like if Apple actively tried to make a genuine gaming MacBook, with all the gaming specific optimizations that entails, to directly compete with them.

If you’ve read any of my reviews for gaming laptops, you might have picked up that I’m really not a fan of the gaming laptop aesthetic. Is it a robot? Is it a car? Maybe it’s a stealth bomber? Nope, it’s none of these things. It’s a laptop, and trying to make it look like something that a high school junior in 2004 would have thought looked totally bad ass is such fallow ground in 2022 that I am honestly running out of snarky ways to say how awful it is.

It’s not just unimaginative design, it’s anti-imaginative. It’s what happens when you have product designers who studied trend-setting designs from a generation ago but can’t come up with a genuinely original idea on their own.

Even more likely, it’s a problem of corporate bosses taking the daring designs presented to them by talented designers, crumpling them up, and tossing them towards a wastebasket.

“Gaming laptops full of sharp angles with the color of boring sports cars is what we’ve always done, so I’ll be damned if we do anything different,” the boss might say as the designer watches the product of months of their hard work miss the wastebasket by a good foot and roll helplessly across the floor, lost in a sea of crumpled up paper balls full of exciting innovations.

Say what you will about Apple, it’s not that. It has a world-class product design team over there in Cupertino; and not only that, it’s a company that’s not afraid of change. Yes, the MacBook lineup has featured the same overall design for a long time now and it’s desperately in need of a makeover. But so did the iMac, and it’s on its second redesign since it launched in 1998. The MacBook will certainly get one as well, but the same can’t be said of just about any gaming laptop out there right now.

What would Apple’s take on a gaming laptop look like? I honestly have no idea, but it absolutely would not look like anything on the market today, and if the past is prologue, the design elements of a gaming MacBook would immediately be copied by competitors and it could finally breaking us out of the ugly rut we’ve been stuck in for ages.

Could a gaming MacBook even appeal to gamers at this point?

So why don’t we see Elden Ring and the like on a MacBook Pro? Apple’s insistence on tightly controlling the product ecosystem might be to blame here, since some developers might simply find the business side of things too restrictive (i.e., the fight with Epic Games over Fortnite on iOS).

Apple’s dragging its feet on Steam support over the years is another culprit, likely because Apple has less control over the distribution channel (and a cut of the revenue, if we’re being honest), and this definitely didn’t help. Since Steam is the largest PC gaming distribution platform in the world, this kept Apple completely out of the PC gaming conversation for years that it could have otherwise spent changing the hearts and minds of the PC gaming community.

That is changing, but Apple is still making up for lost ground it didn’t have to lose in the first place, and it has some ways to go to close that gap. Unfortunately, that gap is about as important as it gets in the PC gaming space.

This kind of cycles doesn’t break on its own; you need something to disrupt it, and honestly, a gaming MacBook could be the thing to do it. A gaming MacBook doesn’t need to be the most powerful gaming laptop on the market, it just has to be great, which Apple is already capable of doing with its current hardware.

Put all of that hardware into a laptop with a gorgeous design and Apple would absolutely win a lot of converts. The biggest Achilles heel for Apple is a comparatively smaller catalog of games than Windows, but Apple’s catalog is still much, much bigger than most gamers even realize (if you don’t own a Mac, why would you even look at Steam’s MacOS offerings, after all). Even I didn’t appreciate the scope of Steam’s MacOS library until just recently, and just about all of the games I play most are already on Mac.

There are some notable exceptions that might be deal breakers for PC gamers, like the aforementioned Elden Ring, or Cyberpunk 2077. But Apple only has control over the product it puts out, and if it were to build a gaming MacBook that PC gamers can’t resist buying, then the developers will have no choice but to follow where the gamers go and the catalog issue becomes moot. It’s also something that caters to possibly Apple’s greatest strength, since Apple has long mastered the art of getting customers in the door with a great looking product they didn’t realize they wanted until they saw it.

Possibly the biggest hurdle for a gaming MacBook would be its price. The 14-inch MacBook Pro with M1 Max isn’t on sale on Apple’s website at the moment, but the 16-inch MacBook Pro with M1 Max starts at $3,499 / £3,299 / AU$5,249. Gamers are used to dropping several paychecks on gaming rigs and laptops, but there are limits to the price we’d tolerate, and $3,499 sure ain’t it.

Still, the price is something that is also within Apple’s control, and if it wanted to make a play for the PC gaming market, it could afford to eat a loss initially to get a foothold. That’s pretty standard business strategy, so a gaming MacBook priced competitively against Razer’s premium gaming laptops isn’t out of the question.

Now, do I think that Apple will announce an actual gaming MacBook anytime soon? If you asked me a year ago, I’d laugh at you for even suggesting such an idea. But after gaming on an M1 Max, I’m not laughing anymore. Apple is pretty much there already, so now I’m genuinely asking where the hell is it and can I get it in purple?