I’ve used the Alienware OLED monitor. I can’t go back

I’ve used the Alienware OLED monitor. I can’t go back 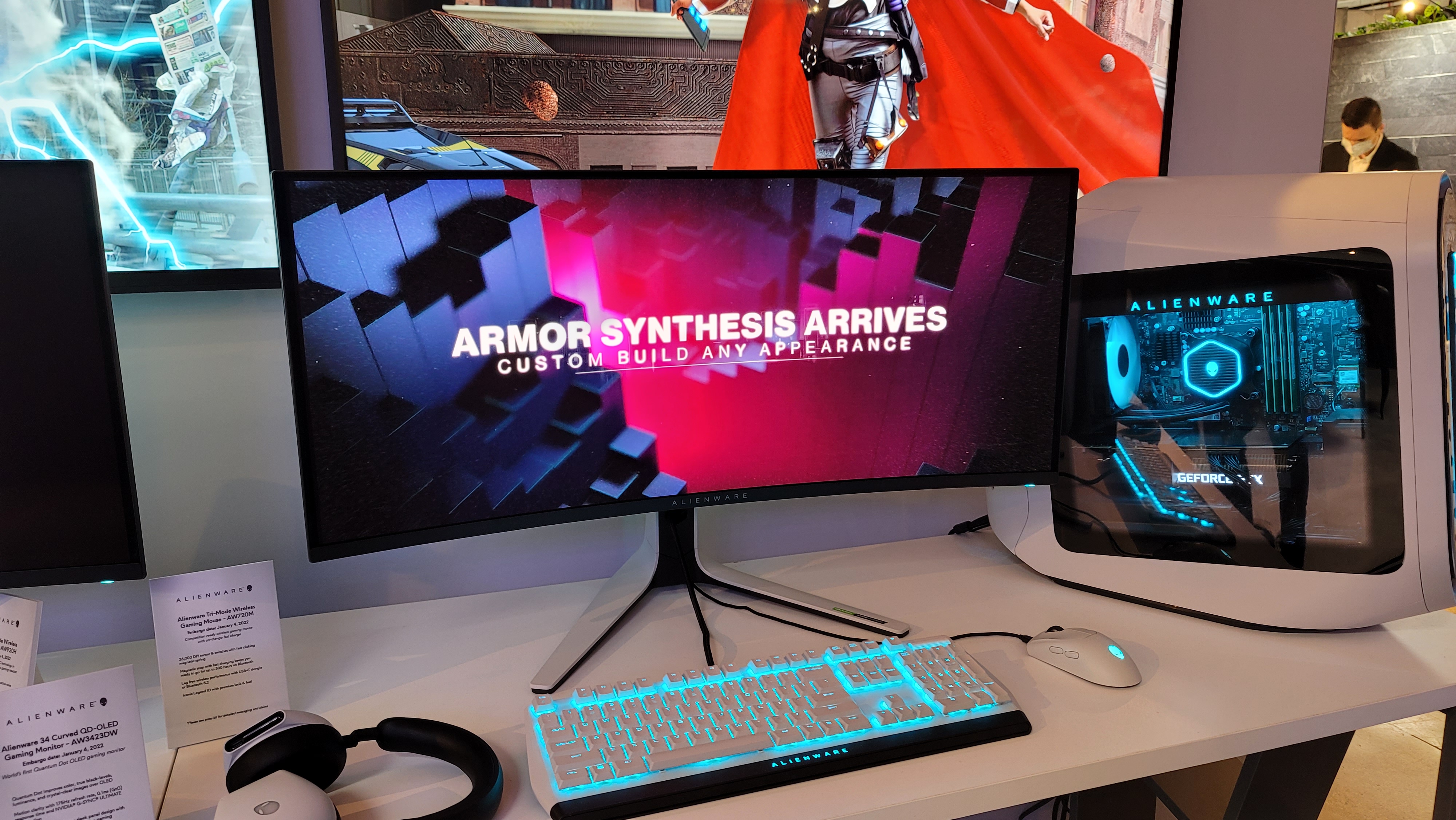 I am generally pretty lucky in that I get to use all the nicest gaming monitors as soon as they’re available. I’ve used extremely huge ultrawide monitors like the Samsung Odyssey Neo G9, and I’ve used smaller but extremely fast gaming monitors, too. As a general rule, I tend to gravitate to what makes games look the best rather than play the best because I like shiny things, but the Alienware AW3423DW seems to be able to do both.

Right now, everyone is talking about the Apple Event, and so obviously I should be talking about that, too. After all, Apple did release the M1 Ultra and even claimed that it was faster than the RTX 3090. That should be sucking up all my interest right now.

But I’ll be honest, I really couldn’t care less about the Mac Studio right now because this monitor just showed up on my doorstep. And as soon as I set it up I couldn’t look away.

This is, at first glance, one of the best-looking ultrawide monitors I’ve ever used. I’m stunned. I’ve been playing a lot of Elden Ring on this thing today instead of, you know, doing my job, just because it looks so good. And that’s in spite of the fact that Elden Ring, for some bizarre reason, doesn’t support the 21:9 aspect ratio.

That means I have to put up with giant black bars on the side. I don’t care. They literally disappear from my vision because this panel is so damn good.

Ok calm down there Jackie

Obviously, because I have found myself ranting about technology for a living, I get kind of worked up about new toys that appear on my doorstep for a review. It’s very possible that this is a honeymoon period, and I’ll find something I hate about this monitor after a week of using it. Whatever, that’s what my full review will be for (stay tuned, 😏😏.)

But it is incredible how much of a difference moving to a QD-OLED panel over the VA panel in my old AOC Agon AG352UCG6 has made. It really is a night and day difference, and while it’s technically the same 3,440 x 1,440 resolution, the image quality is so much better. That’s thanks to the natural benefits of OLED.

OLED panels have individually lit pixels, which means that any part of the display that isn’t displaying a color shuts off entirely, which means blacks are really black, and colors just naturally pop. But then you add the high brightness of this display and the color accuracy – not sure of the measurements yet, but we’ll get there – and moving to the Alienware AW3423DW is basically like moving up to a new resolution.

Of course with that added image quality comes a much higher price tag. What sucks is that I know I’m going to buy this thing as soon as I have to send it back to Dell, and it’s going to cost me $1,307 (about £990, AU$1,780). That’s a lot to ask for a monitor, especially in an age where that’s how much it costs to buy a $600 graphics card.

But this is the best display on the market right now, and it might actually be worth that price, as it’s going to be absolutely gorgeous for years to come.

The games look better, but with the same frame rate

Usually, when you upgrade to a monitor with better image quality, it means you’re going to a higher resolution – and that means it’s harder to run your favorite PC games. However, I was already using a 3,440 x 1,440 gaming monitor, so plugging this in was literally just like an easy facelift for my games.

Looking at the spec sheet, it’s not hard to see why. After all, this is a 34-inch 3,440 x 1,440 display with a 175Hz refresh rate. That’s enough to keep both pro gamers and casual trash like me happy. It covers 149% of the sRGB color gamut, so it’s good for photo and video editing and features a peak brightness of 1,000 nits. Plus! G-Sync  Ultimate!

Obviously, we’ll have to see if this gaming monitor lives up to its spec sheet, but so far things are looking pretty good for it.

I’ve only had the Alienware AW3423DW running for around five hours, but I’ve played everything from Elden Ring to Deathloop to Final Fantasy XIV on it. Every single game looks absolutely stunning. And, with Elden Ring, I forgot to turn on HDR. Oops!

You know how when you get a shiny new upgrade for your PC gaming setup and you just want to boot up all your favorite games just to see how they handle the new thing? That’s what I’m going to be doing over the next few days, and that’s definitely more than I usually do for a gaming monitor review.

So, don’t mind me, but I have some PC games to play for the next few days. And as a bonus, HDR doesn’t suck on Windows 11 nearly` as much as it did on Windows 10.