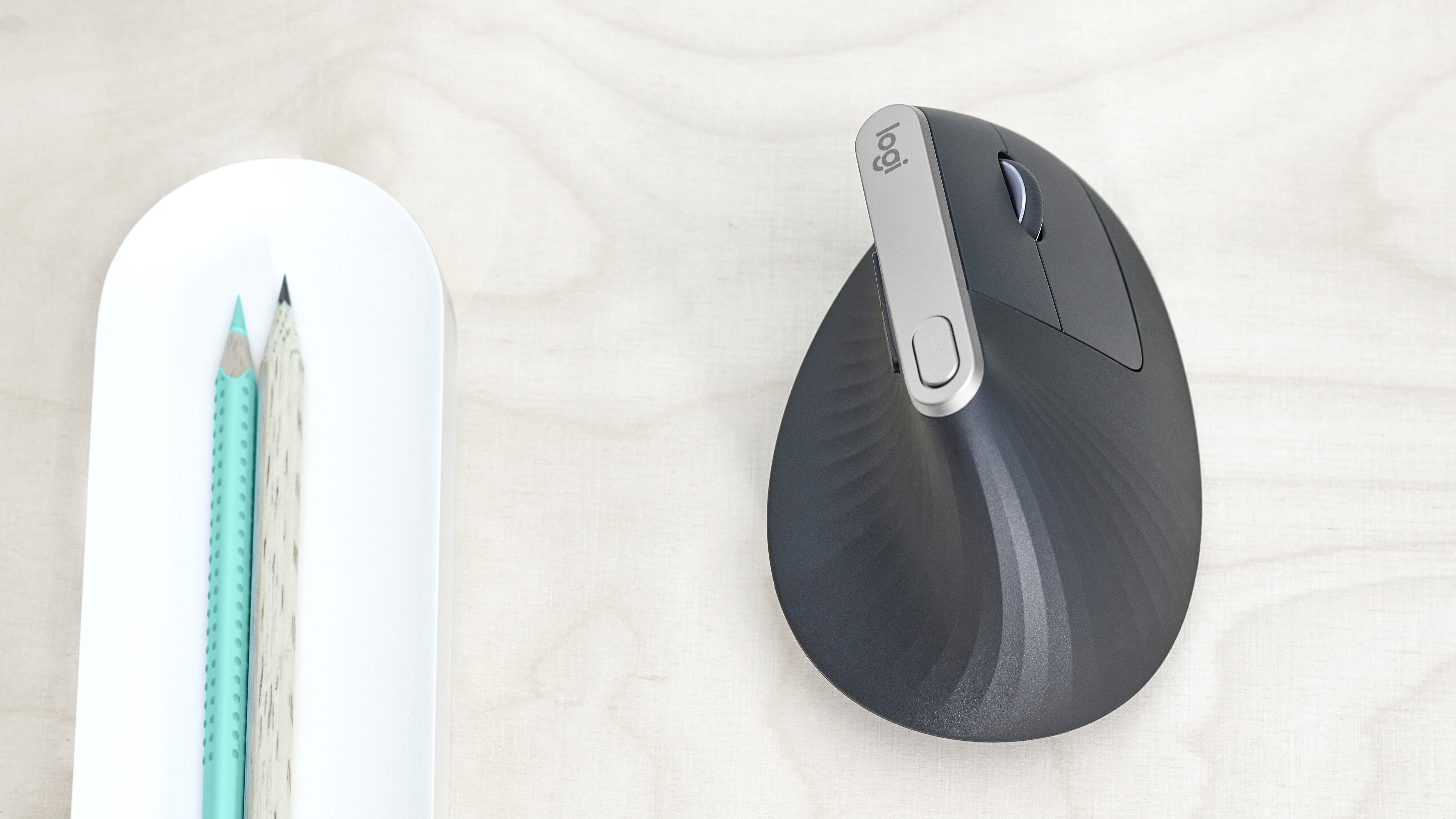 I’m no stranger to working from home; in fact, I was doing two days a week at home even before the pandemic forced many of us to strictly avoid the office. So I’ve had a decent home office setup for a long while – a standing desk, a second monitor docked with my laptop and a decent office chair. What I hadn’t bothered with was a dedicated keyboard and mouse, instead using the laptop’s built-in keyboard and trackpad, which worked fine… until over the course of a few short weeks I found my neck muscles and right shoulder flaring up in pain.

To be fair, the muscle issues weren’t new – I’ve suffered from chronic muscle tightness of the back for a while. What using the laptop’s keyboard and trackpad did was exacerbate the problem until it became a deep burning sensation in the right shoulder joint.

As reluctant as I was to change the setup I was so used to, something needed to be done – and so entered an ergonomic keyboard and vertical mouse into my life. By day three of using both, the burn I was feeling in my right shoulder had all but disappeared.

There’s a lot of debate on whether an ergonomic setup is truly beneficial – some swear by it (particularly companies trying to promote these products), while others think they’re overrated. I take the middle path: the keyboard and mouse have not cured my repetitive strain injuries (RSIs) – far from it – but they have made my day-to-day functioning a lot more comfortable and I’ll happily extol the virtues of the ergonomic keyboard and mouse to anyone who’ll listen.

I’ll also be the first one to admit that it may not suit everyone. But if one of your new year’s resolutions is to boost the comfort of your home office setup, it’s certainly well worth investigating.

The issue with getting an ergonomic keyboard is that there are different types, each with its own pros and cons. Figuring out which one will suit you best isn’t easy, especially when you can’t visit a store to try one.

I spent days researching arm and wrist placements on different types of ergonomic keyboards to see which one would (in theory) help the shoulder joint best. I finally chose the Logitech Ergo K860 split wireless keyboard – it’s also the model we rate as the best ergonomic keyboard here at TechRadar.

And since I had no clue whether it was the laptop keyboard or using the trackpad that was causing my discomfort, I decided I might as well get an ergonomic mouse too and for that I chose the Logitech MX Vertical wireless mouse.

I honestly cannot say whether it’s the new split keyboard, the vertical mouse or the combination of both that sorted me out, but pain that no amount of physiotherapy could fix seemingly disappeared within days. Clearly, it was worth the investment.

Another factor that needs to be taken into account when purchasing ergonomic accessories is compatibility. Most ergonomic keyboards work remarkably well with Windows machines, even offering extra functionality keys that make light work. If you’re a macOS user, you’ll need to make sure there are drivers that you can use.

That said, there’s a fair chunk of ergonomic wireless keyboards and mice that work fine with both operating systems (sometimes even without dedicated drivers). Both my new accessories connected to my MacBook instantly via Bluetooth, but they did require the installation of the Logi Options app to convert them from their default Windows setup to work correctly with macOS.

Another reason I opted for this particular Logitech keyboard was because it uses the company’s PerfectStroke keys, which don’t take a lot of effort and therefore help reduce the strain on fingers and wrists. Moreover, the domed split keyboard design ensured my arms were placed just right, forcing me to sit a certain way and in turn improving my posture.

As for the mouse, the Logitech MX Vertical is a strange-looking device to say the least, but that bulging boat-like shape works in its favor. The ‘sail’ (or vertical) part of it rising from the main body is slightly angled left, offering a remarkably large and comfortable thumb rest, while the opposite face of the vertical rise gives ample space for the rest of your fingers. Interestingly, the way your fingers intuitively get placed is practically perfect, with the forefinger and the middle finger lying on the left and right buttons respectively and the scroll wheel in the middle.

The amount of finger movement required to operate this mouse is the bare minimum. And don’t be fooled by its size – the mouse is extremely lightweight, so moving it around requires no effort.

It’s not all sunshine and daisies with my new ergonomic setup though. It cost me a pretty penny – most ergonomic keyboards and mice are a hefty investment – and it took me days to get used to the split keyboard.

Typing at my usual speed initially led to so many typos that I was forced to slow down and actually look at what I was doing, which in turn affected my productivity and trigger off a few neck aches because I kept looking down.

I’ve had the keyboard now for about four months and I’m still getting used to it. While I have gotten faster at typing – making less typos and not looking at what I’m doing all that much – like most people I’m not a trained touch typist, and the old muscle memory is still placing my fingers in the wrong spots sometimes. For example, my thumbs occasionally still end up in the empty space between the two halves of the keyboard when looking for the G, B and N keys, and I still hit the Fn key instead of the Opt/Ctrl on the right side of the keyboard.

Even the vertical mouse took some time investment on my part to come to grips with. It’s quite big and my hands are small. Adapting from a trackpad to a regular Apple Bluetooth mouse, and then to the larger MX Vertical wasn’t all that easy. A couple of weeks into using it, though, it felt like the most natural thing to hold, but I do have to use my middle finger to scroll as its longer length reaches the scroll wheel more easily.

Despite claiming that the two new accessories have improved my day-to-day work, I can still feel my neck and shoulder complain occasionally. It’s important to remember that ergonomic keyboards and mice aren’t a cure – they’re a preventive, provided you’ve found the right one for you. The damage to my muscles has been done – what the keyboard and mouse do is help curb further problems, and give the body a chance to heal itself.

And they don’t work independently. You still need a good chair to maintain your posture and make sure your arms and knees are parallel to the ground – it’s the entire setup that can help alleviate typing-related strain.

So, if I’m still feeling it, was it all worth the money? For me, yes. The fact that I can work pain-free for the most part trumps the inconvenience of learning to adapt to an ergonomic setup. Sure, I’m still a little slow at typing and the keyboard takes up a lot of space on my desk, but I’ve seen a huge improvement in comfort while working.

This article is part of TechRadar’s Tech Resolutions series, a motivating blast of encouragement showing you how to supercharge your new year with tech. Running from Sunday December 26 to Sunday January 2, our series will also reveal how we’re aiming to level-up our gadget lives in 2022. So whether you’re looking to become a Chromebook power-user, beat your takeaway obsession with a new air fryer, or use a smartwatch to propel you to new fitness heights, we’ll show you how to get your new year off to a flier. And when it all inevitably goes wrong, you can always blame the gadgets.