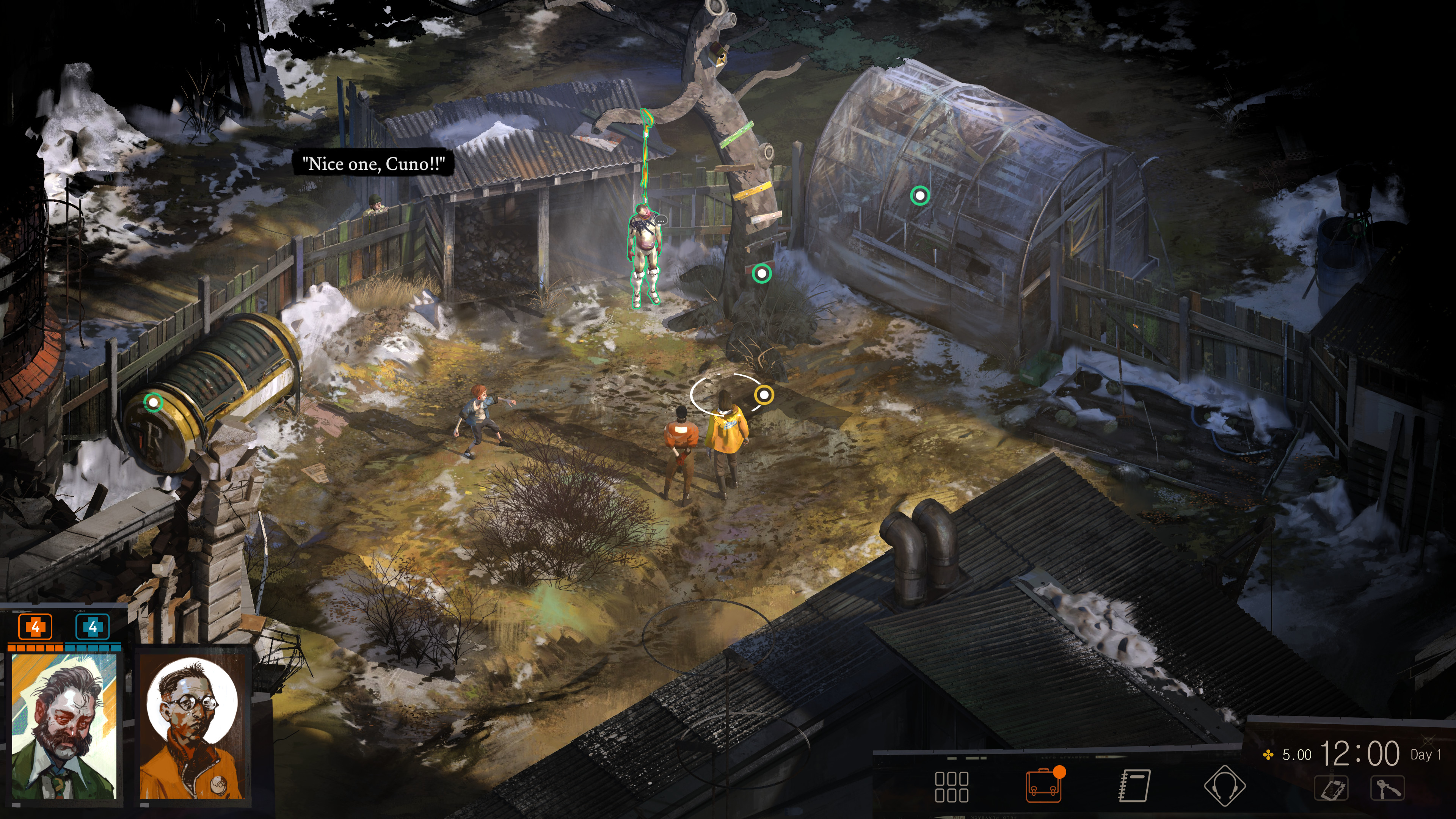 The best laptop games are there for you whenever you’re on break for work and you just need to kill some time before you get back to the grind. Because they’re so easy to run, even cheap laptops will be able to play these games just fine.

Don’t think you’re getting some third-rate games here, either. Games like Disco Elysium are not only easy on your laptop, but engaging and hilarious to boot. The laptop games on this list are among the best PC games on the market right now, and really goes to show the flexibility that PC gaming offers.

Even if you’re using one of the best gaming laptops, the games on this list have a lot to offer, even if they’re not quite up to snuff to the mighty graphics in more powerful notebooks. This list is by no means extensive either: but we narrowed down the 10 games that everyone should consider installing on their laptops for some nice gaming on the side.

Ever had grand dreams of becoming the greatest detective in history? We know we did, and we have just the game for you. Disco Elysium is digital heaven for those who’ve always had a knack for problem-solving skills and fancy themselves the coolest (or most crooked) PI in their daydreams.

In this open-world RPG, among the best laptop games that you can play right now, you have unprecedented freedom to do whatever you want as a detective – whether that’s solving murder mysteries and helping people or taking bribes, manipulating others and becoming a millionaire. And, that’s with a plethora of wild skills and cool detective tools at your disposal.

The city you’re running around in, of course, has that certain mystery je ne sais quoi atmosphere to it, like Gotham-meets-Neo-noir. And, it only adds to this extremely charismatic title. If you’ve got hours to kill, or really even if you don’t, this game needs to be on your laptop right now.

Among Us seems a bit more casual than other titles on this list, with each game lasting 10 to 15 minutes but that doesn’t mean you won’t lose hours playing it. The concept is relatively simple. 4 to 10 players are placed in a map, either a spaceship or space station, and are tasked with some menial errands. Up to 3 of the players are secretly imposters who pretend to do the same things but actually go around sabotaging things and killing other players. Emergency meetings can be called where players argue over who the imposter is and then vote to kick someone out. Considering how short each game is, just about everyone will have a chance to play as an imposter after a few games.

What makes Among Us such an enduring game is how it can bring friends together the way a good board game can, combining socializing and strategy in a way that most online games don’t.

You might be turned off by the tremendous amount of challenge it poses, but we promise you that Cuphead is worth a shot. If you don’t already find its vibrant, whimsical art style delightful, then you might be convinced by some backstory of how it was made.

Cuphead is from indie developer Studio MDHR (short for Studio Moldenhauer), named for the two brothers who started the project, Chad and Jared Moldenhauer. In fact, the whole company is made up of family members and friends who sought out to finish their dream project.

Marija Moldenhauer, Chad’s wife, was responsible for the inking and clean up in this hand-drawn ode to 2D platforming classics like Mega Man and 1930s Fleischer cartoons like Betty Boop. And, if the 19 bosses aren’t enough for you, Cuphead is getting a major DLC next year featuring new bosses, areas and a new playable character.

If you’re a fan of history-based strategy games like Civilization or Age of Empires but are looking for something a little different, then Humankind is for you. This game takes that format and gives it a little twist, allowing you to customize your gameplay as you go. You can upgrade to different cultures as you progress and shape your empire with all sorts of decisions regarding religion, war, alliances, and more that can have long lasting impacts. In fact, every play through will be different.

You can wage nuclear war or destroy the world with pollution in Humankind, but your goal is to be the most famous empire by the end of the game to win. While it does seem to share a lot of similarities with the aforementioned giants of turn-based historical strategy games, that added level of customization, different mechanics for city-building and waging war, not to mention the ability to essentially rewrite history makes Humankind a worthy and unique addition to the genre.

If you’re obsessed with farming sims (and, considering how well the likes of Farming Simulator and Harvest Moon sell, there’s a few of you out there), then few games will get you jumping for agricultural joy more than the enchanting busywork of Stardew Valley.

Taking cues from the Harvest Moon games, Stardew Valley’s top-down point of view and cutesy characters feel blended together seamlessly, making it one of the best laptop games available.

It doesn’t seem all that exhilarating, tending to fields, growing produce and raising livestock – but that’s the beauty of it. There’s a special kind of peace to the mundanity of Stardew Valley’s minutia as you expand your farm, catch some fish down at the river and even head into the village to strike up friendships (and maybe something a little more) with a cast of NPCs. Farming has never been so much fun or addicting.

Fans of RTS games rejoice! Age of Empires IV is here and it takes everything that made previous entries so much fun and updates it. Not only does the game receive a fresh coat of paint but the AI and mechanics have been updated as well.

You can select one of eight civilizations to play your way through four distinct campaigns covering 500 years of history, ending at the Renaissance. You don’t have to stick to the single-player campaign however. You can also play with friends in PvP or multiplayer co-op as well. And, more importantly, you don’t need a hefty GPU to play, making this a great game to play on your laptop. You just need integrated graphics as good or better than Intel HD 520, which has been around since 2015.

7. Night in the Woods

In more than a few ways, we’re inclined to describe Night in the Woods as Life is Strange meets Bojack Horseman. The interactive dialogue bits are reminiscent of the former while the overarching themes of dealing with mental health issues ring true in the latter.

Night in The Woods itself was developed in Unity by Infinite Fall, the virtual studio comprised of coder and composer Alec Holowka and Twitter jokester slash illustrator and animator Scott Benson. Together, these two have designed not just a game, but a stunning world full of relatable characters that should hopefully resonate with you.

You take on the role of Mae, a cat who dropped out of college and recently returned to her hometown of Possum Springs. It’s a completely narrative-driven game, as modern point-and-click adventure games tend to be, with very few gameplay hooks that will hold your attention. So, if you’re into Telltale Games or Life is Strange, Night in the Woods might be the best laptop game for you.

Best of all, it will run fairly smoothly on integrated graphics, given that it has an attractive, but not highly demanding, art style. Surely, this is a title we’ll be talking about for years and years to come, even if it was snubbed at The Game Awards.

The 90’s are still alive in the form of the Command & Conquer Remastered Collection. This doesn’t just have a remastered version of the original game from 1995. It also has Red Alert as well as the games’ three expansion packs for over 100 missions and over 250 multiplayer maps. That’s quite a lot of content in this release.

Among the best laptop games to dig into this 2020, this remastering includes upscaling the cinematics, remastering the music (including 20 re-recorded tracks), and most importantly, setting the game in 4K resolution. The controls have been updated for a modern experience including the ability to use hotkeys. And, the game comes with mod support for those who want to add their own spin to the game.

The core of the game is still mostly the same as it was in the 90’s so if you’re looking for a great looking, great sounding blast from the past, then this is the perfect escape for you.

While it’s a 2018 title and has a reasonably massive following, your laptop’s integrated graphics can still run Pillars of Eternity 2: Deadfire. It has mostly the same forgiving system requirements as its predecessor, so if you are a fan of that game, you should be able to engross yourself in this best laptop game as well.

Pillars of Eternity 2: Deadfire drops players on the Deadfire archipelago and tasks them with hunting down a rogue god. And, just like its predecessor, it features rich storytelling and deep RPG gameplay that harkens to the days of Baldur’s Gate and Neverwinter Nights.

While all the backgrounds are in 2D and viewed from a top-down point-of-view, they’re still lovely to behold. Plus, the numerous spell effects will keep you bewitched as you work your way through the intense and tactical combat.

And, because it’s coming from Obsidian, a studio known for making the best RPGs of all time, you can be confident that you’re getting an adventure, and one of the best laptop games, that’s worth every penny.

If somebody told you a game about working in a border control office would be one of the most addictive games ever, would you scoff and walk off shaking your head?

Well, you might give a little indie gem by the name of Papers, Please a chance. Set in a fictional take on the Eastern Bloc, you’re an immigration clerk tasked with processing refugees from a hostile neighbouring nation.

The core concept is simple: check each person’s documents against a clear set of rules, process those who meet the requirements and detain those with false papers.

The game is created to test your attention to detail, as well as the strength of your moral compass. Sometimes you’ll have to decide if specific sympathetic characters should be granted asylum, even if it goes against the rules.

The twist is good performance effectively feeds you family, while mistakes put their lives in danger. It’s dark, but engrossingly so.