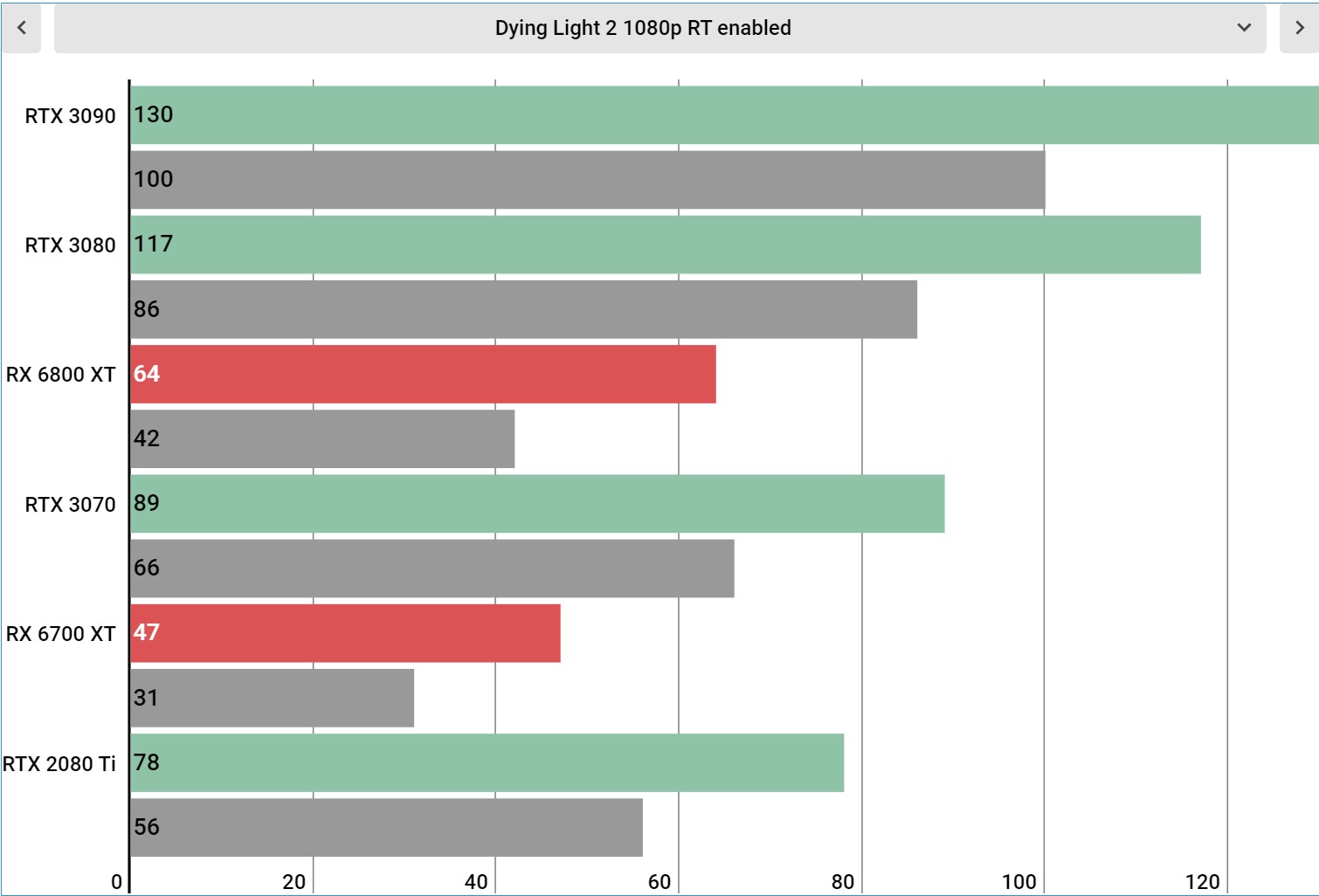 PC games like Metro Exodus and now Dying Light 2 are key to showing what the future of PC gaming will look like, particularly in the world of graphics. Back in 2018, Metro Exodus used its focus on horror and atmospheric level design to really show how ray tracing could enhance presentation and impact how a game is played. Dying Light 2 does the same thing — only this time, it does it even better.

Back when Dying Light 2’s system requirements were first announced, I was honestly shocked at the high system requirements, particularly for graphics presets with ray tracing enabled. Now that I have my hands on the title and I can do a bit of benchmarking – my favorite thing in the world – I finally understand why the bar was so high.

This game will raise the bar for ray tracing for a while, and will definitely be a game I personally use to test future hardware for a long time to come – even if it annoyingly doesn’t feature a canned benchmark. It’s the game to test ray tracing in 2022, and you should definitely at least try it if you have the hardware for it.

Unfortunately, that’s a pretty big if, as the game with ray tracing enabled is extremely heavy. I benchmarked it across 6 different graphics cards to see exactly what you need to play with the fancy lighting effects, and … well, you’re going to need a pretty fancy GPU.

Dying Light 2’s performance, especially at 4K, is really funny to me. That resolution was supposed to be democratized with the release of the RTX 3070 – something I called out in my review of that graphics card. But even with DLSS enabled, there’s hardly a graphics card out there that can hit 60 fps at that resolution with ray tracing enabled.

With all the ray tracing effects enabled and DLSS set at the Quality preset, the RTX 3090 usually hovers around 40 fps at 4K. That’s definitely playable, but it’s not ideal, especially in a game that’s so focused on quick movement. You don’t want a zombie – sorry, biter – to take a chunk out of you just because your framerate dipped. Changing the DLSS preset to Balanced mostly fixes this, and we see performance at this level go up to 55 fps. So, that’s the preset we did all of our testing with.

If you’re not one of the privileged few able to afford an RTX 3090 or RTX 3080 Ti, you’re going to need to move to the Performance DLSS option, which saw fps go from 48 fps to 58 fps on the RTX 3080. That’s essentially 60 fps, and felt incredibly smooth. But if you don’t have an RTX 3080 or better, you should basically forget about playing Dying Light 2 at 4K with ray tracing enabled.

If you do have a less powerful card and want to play at 4K, our advice is to just disable the RT effects and keep DLSS and FSR enabled. Performance doubles without ray tracing on Nvidia cards, and will go up by 4x on AMD Radeon cards.

AMD’s RDNA 2 architecture finally added ray accelerators, meaning Radeon RX 6000 series graphics cards such as the RX 6800 XT can use ray tracing effects without being a literal slide show. But AMD is far behind Nvidia when it comes to ray tracing, even with its generally fantastic FSR software enabled. Yes, Dying Light 2 features both DLSS and FSR; it’s like the developers knew how hard the game would be to run.

But the gulf in performance is obvious when you look at the numbers. The AMD Radeon RX 6800 XT, a GPU pitched as a 4K graphics card when it launched, gets just a 25 fps average with ray tracing enabled and FSR on its Balanced preset. That’s compared to the RTX 3080’s 48 fps with ray tracing enabled and DLSS on Balanced. DLSS is more powerful than FSR generally, but if you’re using the best option you have available to you, Nvidia just has the stronger hand in this game.

With the RX 6800 XT, you’re not really going to see great performance with ray tracing enabled unless you’re running at 1080p, again with FSR set to Balanced. At that resolution, you’re getting 64 fps. But if you’re cutting down to 1080p on a 4K monitor, and you’re adding FSR on top of that, it’s pretty hard to look at.

Luckily, just turning off ray tracing on the AMD cards completely solves the issue. The games presentation changes quite a bit – especially in indoor areas, due to the lack of ray traced global illumination – but your performance will jump up fourfold.

At 4K with FSR set to balanced and ray tracing disabled, the RX 6800 XT jumped from a 25 fps average up to 101 fps. Literally quadrupling the frame rate.

In Dying Light 2, at least, ray tracing is simply not worth enabling on an AMD graphics card. And, if you turn it off, you’re going to get extremely good performance across the board. Don’t get me wrong, the game doesn’t look bad with ray tracing enabled, it’s just a bit different. And, honestly the game will probably be easier without the lighting effects, so that’s something to take into consideration.

Is Dying Light 2 ray tracing worth it?

I’ll probably always enable ray tracing for games that support it, because I like shiny things. But for most people, I usually recommend turning it on, looking at how fancy it looks, and then turning ray tracing off so you get a playable frame rate.

In a horror game like this, with a lot of dark spaces where you want to feel like there could be monsters lurking, a more realistic lighting engine just makes sense. Thanks to the ray traced global illumination, areas of the game that would be dark in real life, due to where they are in relation to a light source like a window or a light bulb, are actually dark. As in, you won’t be able to see anything there. That makes the game a bit harder to actually play, but if that’s what you want out of the game, then it’s a setting that’s definitely worth enabling. More than the RT Ambient Occlusion, shadows or reflections – ray traced global illumination changes how you play Dying Light 2.

Darker areas will be more dangerous and you’re going to be more reliant on your flashlight – which you can also make ray traced in the settings menu.

What complicates this further, though, is how much movement matters in the game. Just as in the first game, Dying Light 2 has a strong focus on fast movement and parkour, which makes sub-60 fps gameplay more uncomfortable than it would be in slower-paced games. Hitting the 60 fps sweet spot is definitely more important here than it was in Metro Exodus – a game that uses global illumination for the same kind of effect.

A better PC port than I was expecting

I’ll be honest, when I first saw Techland release system requirements for Dying Light 2, I was bracing myself for a rough port. However, I’ve been pleasantly surprised.

And with ray tracing disabled, the performance is strong across the board, and is further enhanced by Techland including both DLSS and FSR. That means you get upscaling tech that works, no matter what hardware you’re running in your PC.

There are some things I would change, like making the menu have a 21:9 aspect ratio when connected to an Ultrawide monitor or letting you control the whole settings and inventory pages with your keyboard. But for a PC port in 2022, everything just kind of works.

Plus, you can bet that the PS5 and Xbox Series X versions of this game don’t look nearly as good. I can say definitively that if you’re going to be playing Dying Light 2, and you have access to some decent PC hardware – the PC is going to be the ultimate platform for this game.