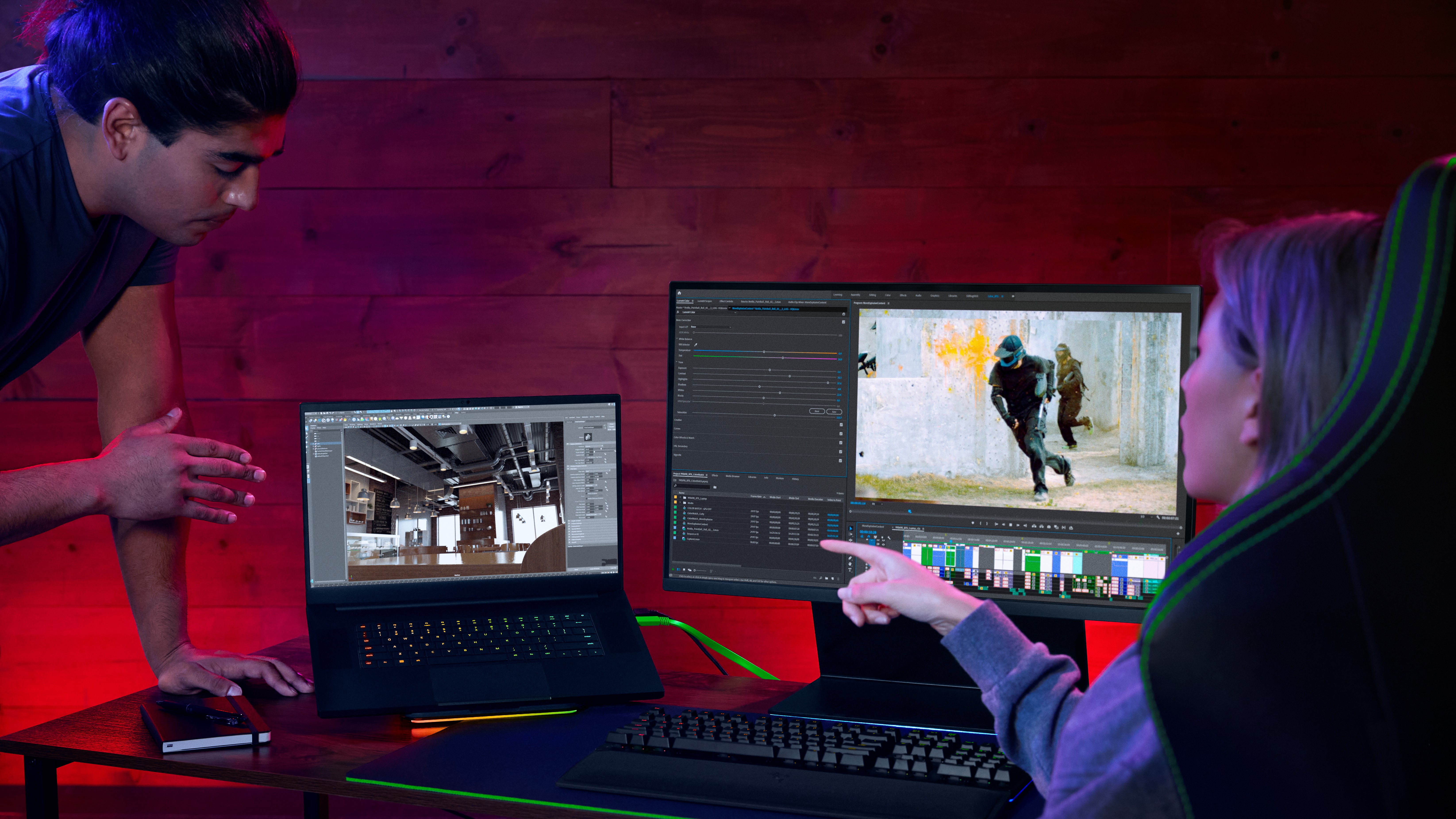 We’ve taken an early first look at the performance stats of the GeForce RTX 3080 Ti Laptop GPU and the new Max-Q technologies and are pleased to report some very impressive results.

The hike in performance delivered by the RTX 3080 Ti is no more evident than it is while gaming, with the laptop GPU delivering hugely impressive gains over the previous RTX 2080 SUPER GPU. In Assassin’s Creed: Valhalla, there is a whopping 1.53x improvement in gaming performance at ultra-high settings, while in DOOM Eternal there is an even more impressive 1.92x boost in performance from NVIDIA’s latest flagship laptop GPU.

The RTX 3080 Ti handles everything thrown at it with ease; there’s a 1.56x performance increase in Call of Duty: Vanguard, a 1.66x increase in Cyberpunk 2077, and a jaw-dropping 2.3x increase in Metro Exodus Enhanced Edition when compared to the RTX 2080 SUPER-powered Razer Blade laptop.

This massive performance boost isn’t all that is impressive about the RTX 3080 Ti. NVIDIA continues to lead the ray tracing race thanks to its 2nd-gen RT cores. NVIDIA’s DLSS makes games even faster; the AI rendering technology boosts frame rates using the RTX 3080 Ti’s dedicated Tensor Cores, so there’s no stress if you’re maxing out game settings.

The number of creators keeps growing rapidly. The RTX 3080 Ti is the best GPU for content creators, with dedicated hardware that accelerates video, ray tracing, and AI workflows, and with a huge 16GB of GDDR6 memory – the fastest memory ever shipped in a laptop.

These amazing speedups are thanks to improvements on NVIDIA’s Ampere architecture. Compared to the last generation, the RTX 3080 Ti outperformed the RTX 2080 SUPER by as much as 128% in Redshift Render, besting the MacBook by some 102%. Similarly, in Octanebench, the RTX 3080 Ti recorded performance gains of 100% compared to its predecessor.

The RTX 3080 Ti also gives creators access to all of the NVIDIA Studio benefits, including accelerations on the top creative apps, ultra-reliable NVIDIA Studio drivers, and unique apps like NVIDIA Omniverse for 3D editors, NVIDIA Broadcast for live streamers and video editors, and NVIDIA Canvas for graphic designers. And it can be found in beautiful, purposely-made creator designs with incredible displays.

The RTX 3080 Ti is bolstered even further by NVIDIA’s new 4th generation Max-Q technologies, which utilise AI to deliver extreme efficiency in thin, high performance laptops. CPU Optimiser enables the GPU to optimise the performance, temperature, and power of the CPU to ensure your laptop’s CPU works more efficiently when gaming or creating. As power is saved, it is shifted between the CPU and GPU to improve performance. Rapid Core Scaling offers significant benefits for creators; it scales the optimal number of cores and operates them at higher frequencies, delivering more performance for intensive creative work and STEM apps while on battery power.

Max-Q technologies are also lifesavers when you’re running on the laptop’s battery. Max-Q’s improved Battery Boost 2.0 finds the optimal balance of GPU and CPU power usage, battery discharge, image quality, and frame rates for longer battery life. NVIDIA claims that with this feature enabled you’ll get up to 70% more gameplay from your laptop whilst on battery.

The GeForce RTX 3080 Ti is a force to be reckoned with, judging by these specs, and whether its for gaming, creativity or STEM work, it seems like you’ll struggle to find a performance to match. Stay tuned for new laptop system reviews featuring the NVIDIA GeForce RTX 3080 Ti and other GeForce RTX GPUs starting tomorrow.